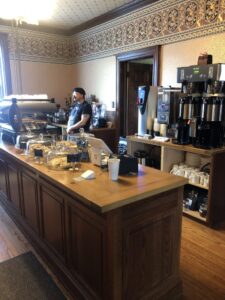 In August of 2018, Backhouse Cafe Coffee & Tea, owned and operated by Ron and June Wright, opened the doors of their restored Victorian Era mansion to the public.  As they moved in upstairs and opened the coffee shop on the first floor they incorporated their desire to know their neighbors into every aspect of the business.  And while their business has benefited from their efforts, their actions haven’t been motivated by their bottom line.  Anyone who’s been in their shop can tell there is something deeper at work here.  I had the privilege of interviewing Ron and June and experiencing the heart of their small business as part of the Covation Center’s participation in PA’s Partnership for Regional Economic Performance grant.

Moving to downtown Williamsport from the western side of town, Ron and June brought with them their desire to build community.  At their previous home they made a point to know everyone on the block. “It’s just who we are,” comments Ron, “We strive to be friendly and make friends.”  True to this nature, they made an intentional effort to not only introduce themselves to their neighbors, but to build relationships with them. 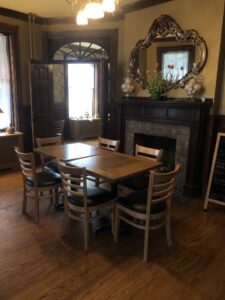 They met the realtor for the rental property next door who used their upcoming business as a selling point for the adjacent vacant apartment. While they were in the process of purchasing the building, they introduced themselves to the directors of the Tabor Museum and the Lycoming County Historical Society directly across Fourth Street, and began sharing their dream for the historic home.  The Historical Society immediately took an interest in Ron and June’s desire to preserve and share this piece of Williamsport’s history with the public. A relationship of mutual appreciation was born which strengthened as challenges to opening a coffee shop in a historic home arose.

As the Wright’s worked through the requirements of the Williamsport codes office, they discovered they needed off street parking in order to be approved to operate their business.  Sharing this need with the Historical Society and directly asking for their assistance, their neighbors across the street were happy to assist, giving permission to use some of their parking.   This mix of friendship and business hasn’t ended there; these two businesses continually refer customers to each other.

Relationships in Every Level of the Business

As I sat at a table talking with Ron, he greeted several incoming customers by name, and it became apparent that relationships are what drive this business at every level.  His customers are more than a source of revenue; they are individuals with hopes, dreams, and stories. With each person who walks through the door, Ron asks himself, “What can I do to make this person’s day better?”  He answers that question by giving people more than just coffee and tea.  He provides a place where you can be seen and known for who you are. 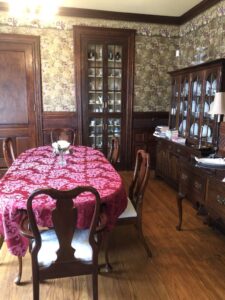 Beyond his customers, Ron has built a relationship with his coffee supplier, Kobrick Coffee.  He shared a story about traveling to their location in New York City and meeting with several generations of this company’s founding family.  Kobrick also spent time training Ron, investing in him to help ensure his success as a client. Now Ron primarily brews their coffee and their relationship has continued to develop, resulting in Ron’s loyalty to their brand.

To the east, across Maynard St. lies a beautiful city park: Ways Garden.  Ron has begun building a relationship with the management of the park. As Spring begins and Backhouse Cafe prepares for their first summer in operation, Ron gets excited talking about how he can promote the events at the park.  It became apparent that he genuinely cares about the success of events held at Ways Park; he is less concerned about the benefit to his own business. His motivation for promoting events at the park is not to increase his bottom line.  His interest in his customers isn’t primarily that they’ll come back.  His interest in the historical society wasn’t just so he could make a deal over parking spaces. Ron and June’s desire for the well-being of their community motivates their relational generosity.  This has resulted in genuine relationships with others, who in turn, care for them and want to see them succeed.

June shared her take on their business methodology:  “It’s just sowing seeds.”  Ron summed up the essence of what drives them stating, “It’s the law of the harvest.  You reap what you sow.”  This business is reaping a harvest of good will from their neighbors and customers that’s a direct result of what they have freely sown.  They sow that which cannot be purchased, but can only be freely given: genuine love for their neighbors.