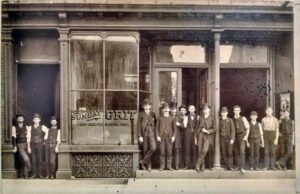 That’s what it took to survive in Lycoming County back in the 1800’s.  So much so, that a newspaper founded in Williamsport bore the name of “Grit.” Small business owners can learn a lot from the courage and resolve of Dietrick Lamade, (pronounced Lah’-mah-dee) a Co-founder of Grit.

Courage: the ability to do something that frightens one.

Dietrick Lamade was a typesetter, who worked for several different newspaper publishers in Williamsport.  He lost his job when his employer had to shut down his printing operation because of depleting funds and failing health.  At age twenty five, Lamade found himself with a wife, two kids and no job to support them. This young entrepreneur partnered with two of his buddies, pooled their resources, and purchased the equipment from his previous employer in order to start their own publication:  Grit. 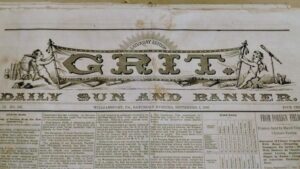 Resolve: decide firmly on a course of action

The first issue, printed in 1882, brought in $4.  Their weekly expenses were approximately $80 to operate.  You don’t need much business insight to see that this is not sustainable.  It would have been easy to become discouraged and throw in the towel. In fact one of Lamade’s partners left the firm very early on because of their struggle to survive.   Lamade, on the other hand, because of his resolve, stuck with it. Soon the company was bringing in $40 per week. Not enough to survive, but if he could grow the business from $4 to $40, why not grow it from $40 to $400?  That’s exactly what he did and within five years his circulation reached 20,000 people.

Strength of Character: being true to yourself, no matter who is watching. 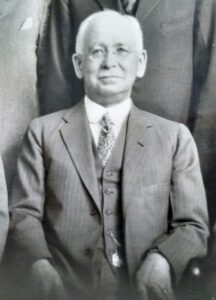 After another ten years of hard work, his paper reached 100,000; Lamade’s perseverance paid off.  This success, however, didn’t change who he was. He did not choose sensational stories or images which played off readers fears or curiousity of the grotesque.  He set his sights on a higher goal and stuck with it. At a banquet for Grit employees, Lamade outlined his editorial philosophy:

“Always keep Grit from being pessimistic. Avoid printing those things which distort the minds of readers or make them feel at odds with the world. Avoid showing the wrong side of things, or making people feel discontented. Do nothing that will encourage fear, worry, or temptation… Wherever possible, suggest peace and goodwill toward men. Give our readers courage and strength for their daily tasks. Put happy thoughts, cheer, and contentment into their hearts.”

Be an innovator:  a person who introduces new methods, ideas, or products. 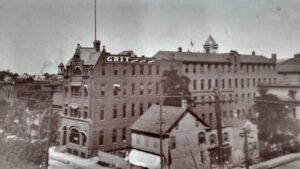 Throughout his career in the newspaper industry,  Lamade was an innovator. He was one of the first to adopt the use of electricity to operate his printing press.  He is also credited with utilizing news boys. Move over Newsies of New York–your occupation got its start right here in Williamsport.  He was also one of the first to use direct mail to reach his customers. Lamade thought outside the box and delivered results.

Williamsport business leaders: This is part of our heritage.  The little league ball field that brings our region into the spotlight of the world every summer sits on land donated by his family and the stadium is named after his son.

What can we learn from Lamade’s story?
Business isn’t easy.  It takes Courage, Resolve, Strength of Character and Innovation.

Photos courtesy of Lycoming Historical Society.  Special thanks to Scott Sagar and all the folks at the Tabor Museum.  If you haven’t visited or haven’t been there in a while, go explore more of Lycoming County’s rich history!